Surya Namaskar (Salutation to the sun) 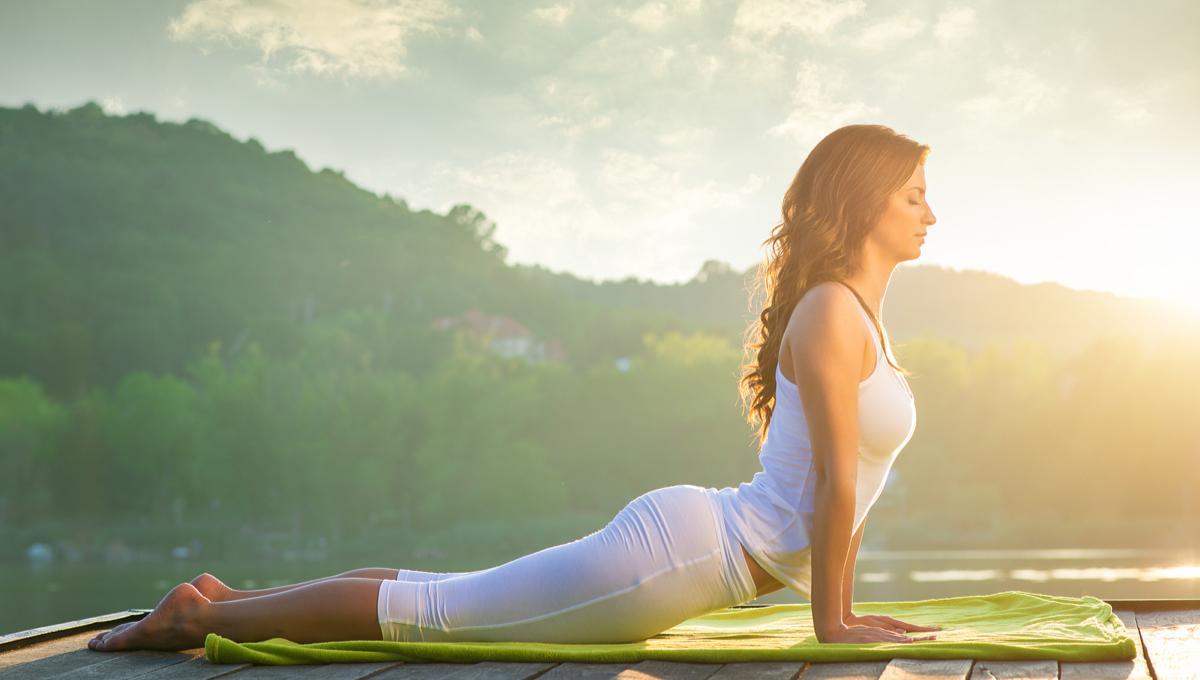 Sun is the sole source of energy for earth and all the beings on it. Sun is Surya in Sanskrit. Surya gives us everything that we need. The whole life system on this planet is dependent directly or indirectly on the solar source which comes to us as light and heat. Sun has the blinding splendor and the brilliance. If there is no sun there could be no existence of the myriads of its life forms. It is believed that life started in water. When sun light and its heat fall on the surface of the water sources, the lakes and seas, the nature of water transforms and becomes vapor. It flies with the support of air. Air moves due the density variation. Density varies as a result of the variation in the heat that acts on any matter. The sole source of heat is the Sun. The wind moves from high density area to low density regions. Rain clouds are carried by the wind and it pours down as rain. Rain water nourishes the Earth. The leaves of plants fix the solar energy as food by drawing water and Minerals from the earth. We beings depend on plants for our food .Food comes to us from sun through a process called photosynthesis that happens in plants.

Sun gives us everything – light, food, Water, clothes, sense of security, warmth and joy!  Hence from time immemorial we humans worship and adore the sun as God. The ancient Seers of the East have seen the significance of Sun worship. Surya Namaskar is a well celebrated vital technique in the Yogic System of practices. Its versatility and application make it one of the most powerful and easy methods to maintain a healthy body and mind. It revitalizes and activates life and at the same time elevates the mind to the heights of devotion and awakening.

Surya Namaskar is never practiced in the traditions as a series of physical exercises that can enhance the muscular power alone, though of course, it stretches, massages, tones and revitalizes all the muscles and organs. The physical parts of Surya Namaskar are alternatively flexing the body backwards and forwards. But the reverence, respect and love to the one who makes us see, feel, nourish, grow and liberate makes it a sublime practice and that is the spirit of this practice. Thus Surya Namaskar is a complete practice for the body, mind, and Soul.

Surya Namaskara is a devotional and energizing start of the day.  It is a combination of Yoga Asanas and Pranayama. It combines both Bahiranga (external practices) and Antharanga Yoga (internal practices). It brings the general flexibility to the body preparing it to immerse in asana practice in a much easier way. It consists of 12 different spinal positions. The sun salutation helps to regulate breathing and focus the mind. Though the best time for doing the Surya Namaskar is dawn, it could also be practiced after the day’s work at the time of the sun set. This is usually done both at sunrise and sunset, facing the sun.

The dawn and dusk are the time of the day at which the energies that fall on the earth are evenly balanced. The energies that are falling are the Solar Energy and the reflected energy of the sun from the Moon, which we call as the Lunar Energy. There are two main Nadis in our Psychic and physical system, Pingala, the solar channel and Ida the lunar channel. Pingala is understood by right nostril breathing and Ida is understood on the basis of the left nostril breathing. Though we have bilateral symmetry we have only one heart and is leaning towards the left side of the body which is considered as the emotional center. Moon influences the emotional aspects greatly and hence the side that keeps the emotional center is considered as Lunar in nature and the side of the body that keeps the seat of fire, the liver, is considered as Solar or vital in nature. Surya Namaskar starts from the null point where the energy of the sun and the moon is evenly balanced. To establish that evenness of mental and Physical energies the practitioner brings both the hands, the Karmedriya of the Heart Chakra, the Chakra of compassion and love, closer to each other in a salutation position there by the Sadhaka senses the unification of sun and the moon, the vital and mental energies. When he is thus balanced the mind is totally free from all thoughts. Surya Namaskar starts with the elimination of all thoughts from the mind.

The Surya Namaskar starts with open eyes, looking at the brilliant sky where the sun is about to make its appearance of the day! At the very start of the day the Sadhaka Chants the Pranava Mantra. Pranavam contains three syllables, ‘A’, ‘U’ and ‘M’. When one chants the syllable “A” the feeling he gets is that of something coming into being, something is getting created. The sun is appearing. When he continues with “U” he feels the created aspect is controlled and maintained which gives the feeling of existence.  When he proceeds with “M” he feels that the existence is converging into withdrawal. Whatever that we see in this manifestation undergoes these three stages, coming into being, existing and withdrawing. I came here, I am here and I will go back, such is the story of the Sun too. We are sharing the same principle Oh! Lord! The Sadhaka gets into a state of unification with the aspect of his Dhyan, the Sun. In adoration he looks at the sun and as the sun goes over him during the day he bends backwards with posture of salutation with his hands and see the western horizon where the sun is going to set and feel that I am seeing your route that gives everything that we wish. What a great friend you are Oh! Lord Sun!

The practitioner feels the friendliness and starts to chant the name of sun with Bija Mantra “Aum Hram Mitraya Namaha! (Mitra means Friend) and feel surrender before him. As a mark of surrender he bends forward and touches the ground with great reverence to Mitram, the friendly Sun.

The different names of the sun according to their meanings instill in the person those qualities like friendship, devotion, energy, health, strength, luster and vigor as he identifies with the supreme and meditates on those qualities during the practice.

Surya Namaskar starts with the prayer:

Each round of Surya Namaskar is done, by chanting the ‘Omkar’ with the appropriate “Bija” mantra, along with the corresponding name of Sun God in the following sequence:

Each stage of Surya Namaskar is accompanied by regulation of breath.

The counts of the Surya Namaskar are as follows:

Keep the right heel pressed on the ground, stretch the toes and press down to the ground fully. Keep the other heel closer to the first one and stretch the toe forward and place in close contact with the right foot. Straighten the legs. Twist both the knees outward to feel maximum grip inside the foot with the ground. Pull the thigh muscles and tug it and tighten the buttocks muscles. Draw the pubic region inward and lift the buttocks slightly upward. Draw the lower belly inward and upward. Keep your hands on the hip and along with inhalation expand the chest. Keep down your hands; straighten the elbows. Stretch out the wrists, palms and fingers. Straighten the neck and pull the chin inward to straighten the back side of the neck. Take a long deep breath and exhale.

Now bring up both the hands along with inhalation through the sides of the body upward and keep both the palms touching each other. Bring down the hands in Salutation position along with exhalation in front of the chest in alignment with the middle of the sternum below which your heart is kept. Now you have arrived at the starting point of Surya Namaskar. With utmost respect, love, gratitude and adoration recite the prayer. Along with the chanting of the first mantra AUM HRAM MITRAYA NAMAHA” raises the hand which is in salutation Mudra as high as possible and bend backward in Ardha Chakrasana.

Bend the body to the front along with slow exhalation and touch the knees with the forehead. Keep the palms on the floor on either side of the legs.

In this stage, kick the right leg back, take the left knee forward, look up at the rising sun with love, respect and adoration and feel that you are imbibing the energy of the sun along with inhalation.

In the next step, along with the next inhalation, take the left leg also back, resting only on palms and toes; keep the body straight from head to toes inclined to the ground at about 30-degree.  Here exhale completely.

Now, bend at the knee and rest the knees on the floor without altering the positions of the palms and toes and come to dog posture along with inhalation. Along with exhalation draw the whole body backward assuming the position of a rabbit. Rest the forehead on the ground.

Without moving the hand and toes, along with the next inhalation come forward in the Dog posture. Start exhaling and bring the chest to the ground and rest the forehead also on the ground. In this position, Sashtanga Namaskara, forehead, chest, palms, knees and feet are the eight parts of the body that will be touching the ground. The buttocks will be raised up. Stay in ‘Breath-out’ condition. (Bahya Kumbhaka).

Inhale; raise the head and trunk making the spine concave upwards without changing the position of the hands and feet. Keep the knees off the ground and assume the position of a Cobra. Look at the sun with respect, adoration, gratitude and love.

Exhale, raise the buttocks, push the head down and have a complete arch with the heels touching the ground and palms on the floor.

Exhale and bring the right leg in between the two hands and in line with them. Arch the back concave upward as in step 3.

Inhale. Come up, and bend back with inhalation. Exhale and straighten the body .Stand erect with hands along the body and relax. 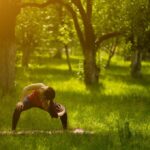 Asanas – The first limb of Yoga 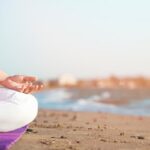 Why is it difficult for a beginner to be still, calm & meditate?

Question: For a beginner who is starting to meditate, it is very difficult to be still and calm. The mind is